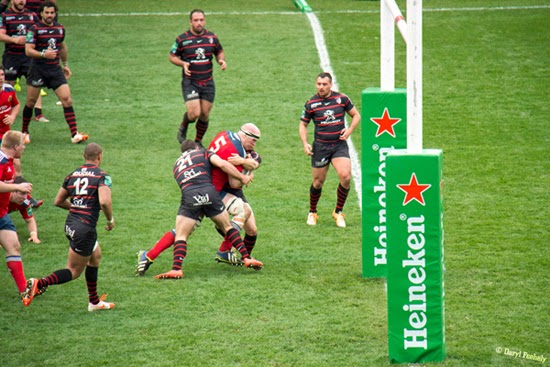 The full set of photos from the match can be viewed here.


What a day, what a scoreline. A six try win over four time HCup winners Toulouse. I must admit, the history and prestige that Toulouse bring had my nerves wrecked coming up to kickoff. Fair play to the Red Army, Fortress Thomond was rocking, and Toulouse were given lots of friendly encouragement on their run in after the warmup. A notable mention must go to the Toulouse mascot, who spent his time before the match dancing around the edges of the pitch making everyone smile, gas man. 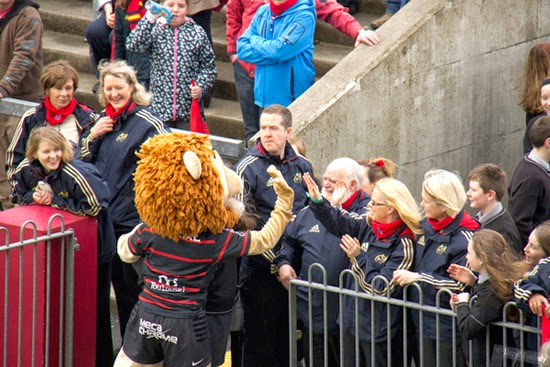 Finally the moment arrived, Nigel Owens blue his whistle to mark the beginning of this epic encounter. Toulouse, as if to reply to the encouragement they were given in the warmup put an impressive marker down in the first few phases when Tekori unceremoniously lifted Paulie over his shoulder and carried him in the tackle. That's something you don't see very often and signaled that they meant business. 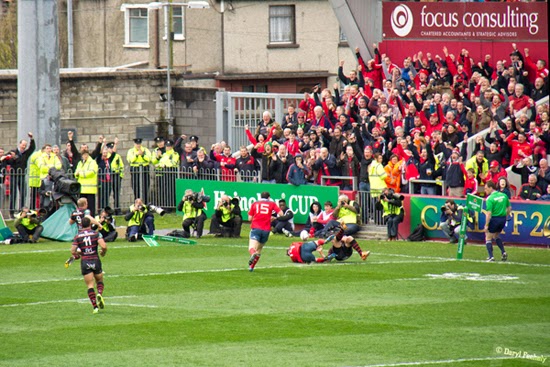 Thankfully Munster answered back, a brilliant offload in the tackle by Zebo to skip Felix and pass to Earls, who touched down within five minutes of the whistle. 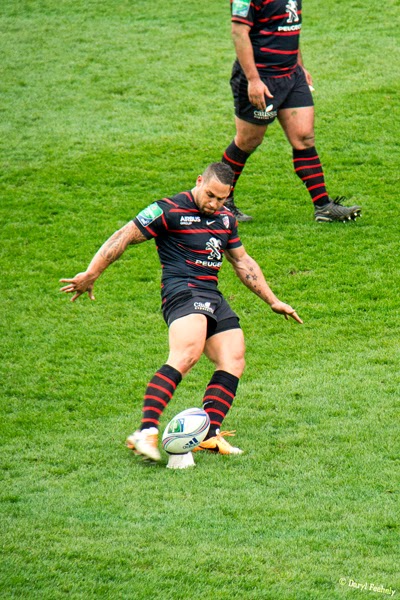 5 penalties followed in the first half, two from Keatley and three from McAlister which put the score at 13-9 at half time. Throughout the first half, the fast and loose passing of Toulouse threatened, but Munster succeeded in smothering their possession and holding them with a solid defence.

A prime example was near to half time when Felix as the last line of defence put in an immense try saving tackle on the Munster 22, which took him a few minutes to recover from. In front at half time was fantastic, but there was lots more rugby to be played.

The only takeaway disappointment was the retirement of Peter O'Mahony from the game twenty minutes in, with what looked like a shoulder injury. No better man than CJ Stander to come on in his stead though and answer the challenge. 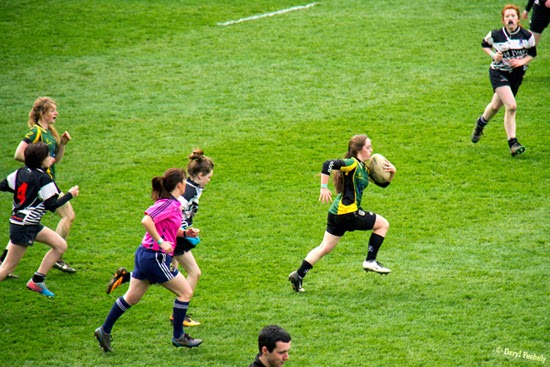 The first ever women's rugby match to be played at Thomond Park took place at half time between 2 under 15s girls teams. The crowd were also treated to a performance by Seo Linn and the MRSC Choir.

Before long the second half was underway and the feeling was almost of a new match. Our game plan was working, but we were ahead by only 4 points. That's nothing in the HCup and certainly not to Toulouse, the behemoths of French rugby. More nerves started to creep in as the teams ran out. 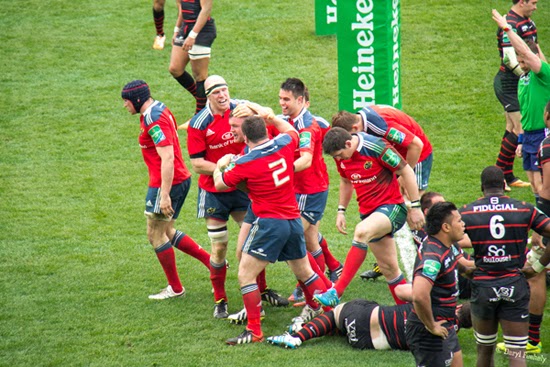 But boy were those nerves misplaced. A savage break by Conor Murray got his head on the line, but unfortunately not the ball. Killer graciously arrived in support and bashed his way through for the try. All this in the first minute. What a way to start the second half, C'mon Munster! 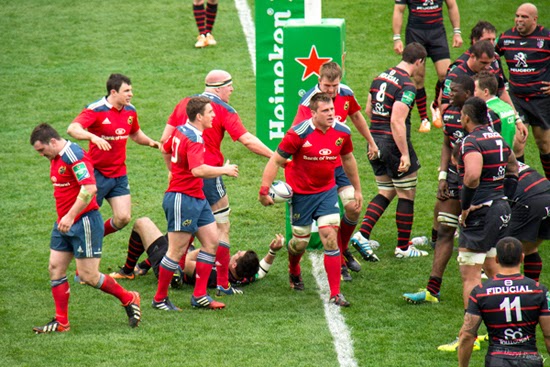 More of the same game plan followed, ferocious intensity at the breakdown and smart covering play in defence. Six minutes later, Murray was off again, breaking through the Toulouse defence and caught just short of the line. This time CJ arrived, picked and blasted through Louis Picamoles as if he wasn't there, TRY! 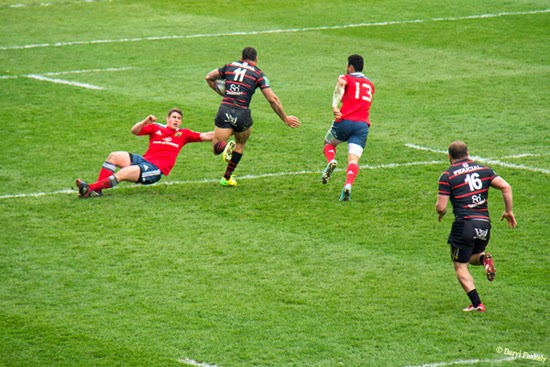 We were ecstatic, two tries within the first ten minutes of the second half, against Toulouse! We dare not get too carried away with ourselves though, there was a half an hour left for Toulouse to punish our exuberance if we let them do so. But what a lead, the dynamic of the game had now changed to dominance for Munster. Problems in the scrum followed and saw Nigel Owens bin Killer and Montes, with Tommy O'Donnell being sacrificed for the entrance of John Ryan to cover the scrum. This was worrying, 14 v 14 meant more room to throw the ball, more room for those big names like Fritz, Fickou, Medard, Gear and Huget to run. And sure enough, 54 minutes in, Hosea Gear burst from midfield and beat Keatley and Laulala to run in an easy try. In fairness to Keatley, he tracked Gear and would have had him if he had not slipped, and Casey was unlucky with his tap tackle, but still an easy try for Toulouse which Beauxis converted. 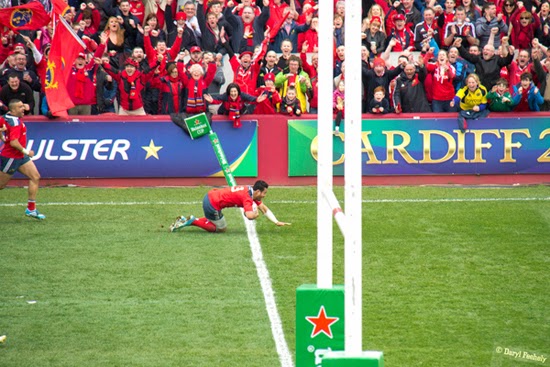 The last thing we wanted was for Toulouse to use this as a springboard to build momentum. We all knew they could and did score a try from nothing. The time had come not to panic, chalk the try down as unlucky and continue to smother them. And that's what happened, but not only that. Every one of the Munster players was on form. Another successful penalty from Keatley was followed by some beautiful outwide passing that opened up the tryline for Casey Laulala to score only his second try for Munster. His try tally does not reflect his work rate and skill level in his time at Munster, and he will be sorely missed next season. Eventually, Toulouse regained momentum and phased successfully to our try line with Tekori setting down a well worked physical try. 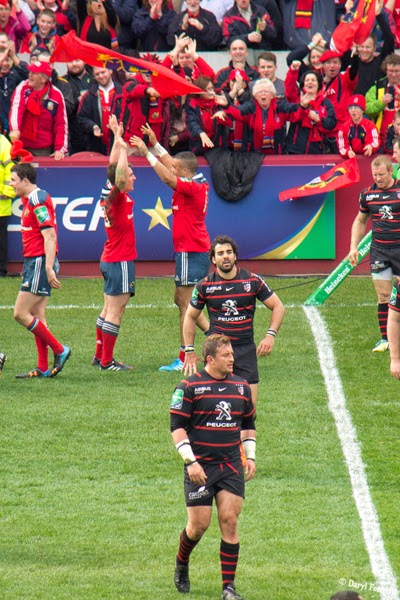 One minute later however, in answer to the Toulouse try, Felix made a break and offloaded to Zebo, who faced two players inside the Toulouse 22. No sooner had Felix gotten the pass away that he was shouting and pointing to Zebo to go for it, not that he needed the encouragement. What defenders? Zebo burst through them to touch down, no need for any fancy footwork on this occassion, just route one. Incredible physicality from the winger who some say, including myself, has a tendency to stand off. Not today. Rumors were that Joe Schmidt was in the crowd, and if he was, it was fitting that Zebo showed what he is capable of at this level of intensity.

And that wasn't the end of it. The last play of the game saw JJ Hanrahan make a great break into the Toulouse 22 to unleash the unstoppable Paulie. Even if the 15 Toulouse players had been in front of him, there was no way he was not getting though. Touch down, conversion, game over. The mighty Toulouse came to our house and we sent them packing, unbelievable! 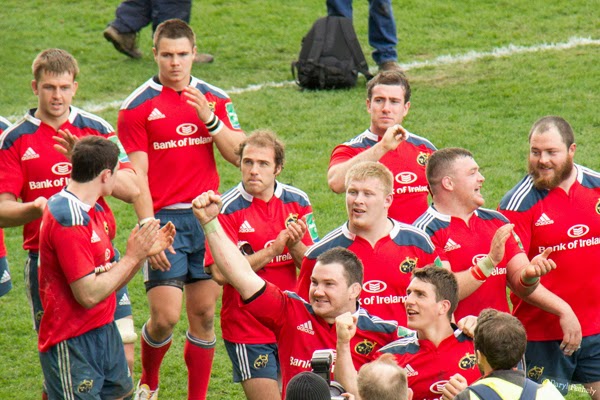 The team walked a lap of honour to thank the crowd after the match, and that's what it sincerely was, a thanks.

The red army stood up and were counted yesterday. To conduct an adrenalin pumping rendition of the Fields of Athenry, followed by applause and then complete and utter silence so that McAllister could take his kick, all within the space of a minute, is something truly breathtaking in the realm of sport in my opinion, and I'm proud to be a part of it.

Birthday boy CJ Stander received a well deserved man of the match, but it could easily have been awarded to any other member of the team. Commendations are also deserved of Nigel Owens, who conducted the proceedings with great composure and attention to detail. He was in position to award the tries, was fair and consistent to both teams and didn't kill the pace of the game. His April Fool's tweet during the week about his impending retirement did send a chill through the rugby community. Despite everyone knowing it was a joke, and a well orchestrated one at that, it still forced us to contemplate what the game would be like without the best referee in the business. 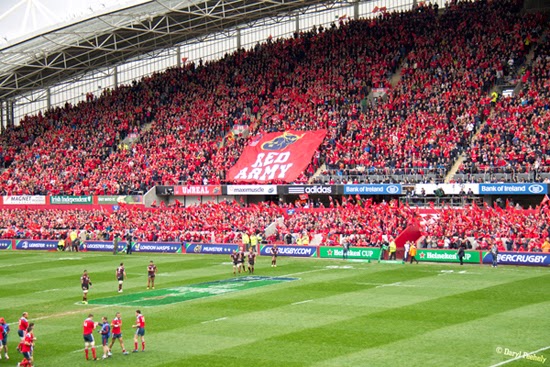 So, where to next? Today we find out our fate, travel to the capital to face the old enemy in their backyard, or abroad to face the superstars of Toulon. Nobody ever said the HCup was easy :-).

March on Marseille it is then.