The 16th man describes the match as seen from the crowd, accurate or not as it may be :-)

The walk up the hill to LIT seemed longer than usual this Stephen’s day. Our bellies full of turkey, ham, biscuits and sweets may have had something to do with the slower pace. The happy festive atmosphere was tinged with a combination of pride and sadness. Everyone knew this would be the last time the world would witness the embodiment of Munster Rugby in human form, John “The Bull” Hayes.

Munster V Connacht the day after Christmas is always an entertaining match. The stakes aren’t as high as other games, which lends to a more relaxed atmosphere, where the crowd can catchup and watch some good rugby on both sides. The match started off slow, with Keatley missing a penalty at 8 minutes, followed by a massive push from Connacht, testing Munster’s defence for a sustained period leading to a penalty for Connacht at 12 mins, which they failed to convert. Munster put the first points on the board with a Keatley penalty at 15 mins. The young Munster backline exploded shortly after, with Scanlon running through the Connacht defence up the wing, putting a grubber kick through to the supporting Keatley 5 metres from the try line. The bounce favoured him, it was a sure try, only for him to knock it on in the air over the line. A pair of penalties either side put the score at 6-3. Munster’s pressure came good at 28 mins when Earls connected with Scanlon to touch down. 13-3 after Keatley’s conversion. A great break and chip ahead from Thomás put his fabled speed to the test, seeing him make twice the ground than his opposing marker. A lucky bounce had him touch down at 34 mins. Keatley missed the conversion, but the score was now 18-3 to Munster. The half ended with Connacht missing a penalty at 35 mins but winning possession with a strong scrum just before the whistle. One notable difference in the first half of this match to other matches were the chants of “Bull, Bull, Bull” from the crowd at every scrum. We didn’t dare acknowledge that this would soon be coming to an end. For The Bull, it was another day at the office. Whether he was pulling up Danny Barnes from a ruck with one arm like a sack of spuds, or getting treated to Donncha’s knee in the face at the bottom of a collapsing maul, there was no slacking off to be seen. 18-3 to Munster going in.

Connacht started the second half as they had finished the first, with a strong scrum putting pressure on the Munster pack and gaining them a penalty opportunity at 42 mins, which they didn’t capitalise on. A slew of penalties followed for the next 16 mins, putting the score at 24-9 to Munster. 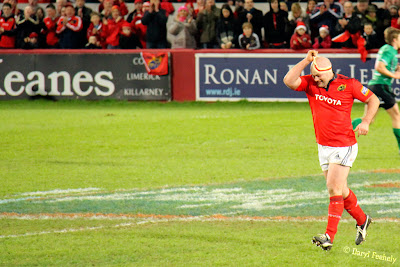 59 mins and 20 seconds, the moment when the most modest man in rugby ran off for the last time. It was as if the whole stadium was put on pause to watch The Bull make his way across the pitch, a smile growing the nearer he got to the tunnel. The warmest of applause filled the stadium to help him across, and continued long after he sat down and the match restarted. The mixed emotions felt by the crowd are hard to express or convey. The majority of us have seen John Hayes as a mainstay of Irish Rugby, part of the furniture no less, and the feelings experienced by his final appearance are similar to the feeling of losing a friend when a long running TV show comes to an end. A rare glimpse of John Hayes on the sideline came from Alan Quinlan on Twitter, showing a smiling Bull [http://yfrog.com/esa04utj].

The remainder of the second half saw Munster hold out with 14 men, after Donncha was sin binned at 60 mins. Connacht were awarded a penalty at 73 mins but again failed to convert. The ground was treated to both renditions of the Fields of Athenry simultaneously, the slow lilting Munster version, and the energetic clapping entangled Connacht version. The benches were emptied but the scoreboard remained unchanged, Connacht unable to breach the solid Munster defence. 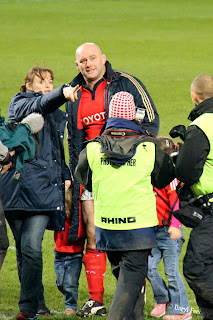 At the final whistle, The Bull emerged with his children for a short canter around the pitch to bid farewell, with a standing ovation reply from the crowd. Not one to bask in the limelight, he was gone as fast, putting an end to an illustrious career in red and green.

Bye bye Bull, you are unequalled, you did us proud and you will be missed.

*The views expressed in this article are that of a Munster fan, and will be biased!

To the Brave and the Faithful, Nothing is Impossible.
Posted by dfeehely at 11:59 AM